Sviatlana Tsikhanouskaya: How she took on an authoritarian leader despite her fears | Europe| News and current affairs from around the continent | DW 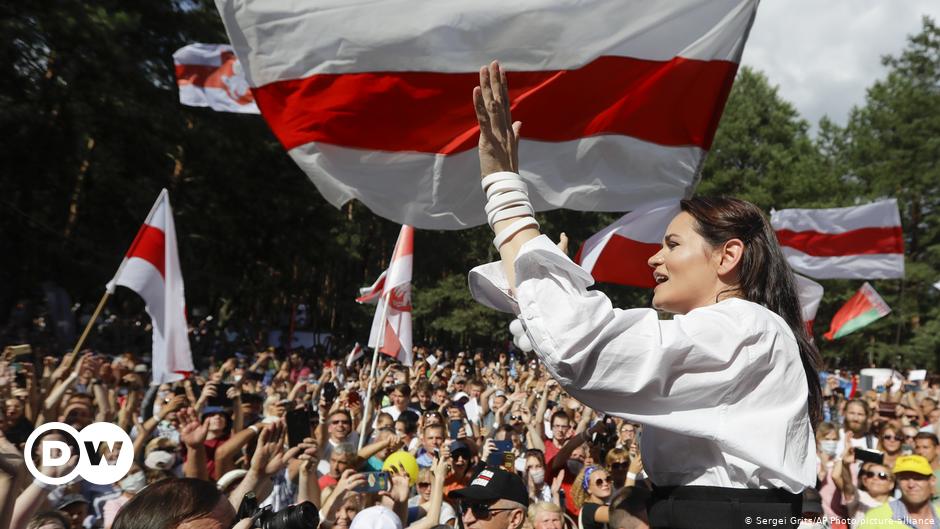 Sviatlana Tsikhanouskaya was a political unknown just one year ago. Today, she has become the leader of the biggest protest movement in Belarus since the country gained independence. The wave of action she led has been awarded the Sakharov Prize for Freedom of Thought by the European Parliament, and she has now been nominated for the Nobel Peace Prize as well.

“I can do everything. I can do it. I already proved it to the whole world. I’m not afraid. You think I can’t take a leadership position? ” she said in a DW interview ahead of International Womens’ Day, which is observed annually on March 8. 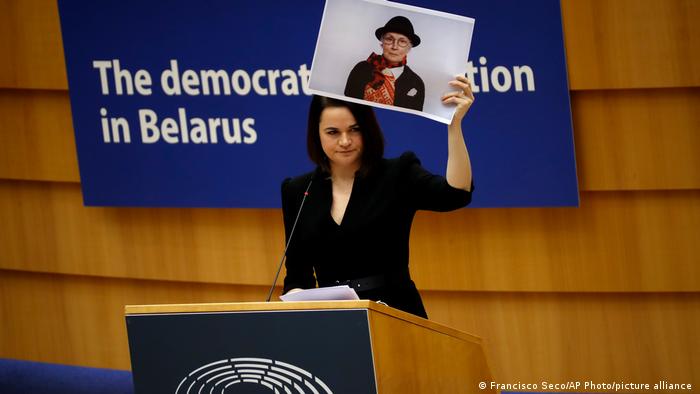 ‘I was a housewife … What should I be ashamed of?’

Tsikhanouskaya emerged in 2020 as the face of the opposition to longtime authoritarian leader Alexander Lukashenko, and subsequently as the self-styled “leader of democratic Belarus.” In May, when her husband Sergei Tsikhanousky, a well-known blogger and democracy activist, was barred from challenging Lukashenko for the presidency and arrested, she ran instead.

The strongman president, who had been in office since 1994, did not take her seriously as an opponent and claimed publicly that “a woman can’t be a president.” He attempted to demean her experience as a stay-at-home parent: “She just cooked a tasty cutlet, maybe fed the children, and the cutlet smelled nice.”

But Tsikhanouskaya’s determination to hit back at institutionalized misogyny struck a chord with millions of women in Belarus and abroad. Asked about Lukashenko’s insults, she spoke of how he mocked “that I’m a housewife, I belong in the kitchen. He was trying to make fun of me,” she said in a DW interview. But Tsikhanouskaya refused to even acknowledge the premise of his derision. “I was never offended by that because it is what it is. I was in fact a housewife for a number of reasons. That’s true. Yes. If he wanted to insult me, he didn’t succeed. It’s the truth. What should I be ashamed of?”

It may be beyond Lukashenko’s imagination that a woman could rule the country. But the opposition leader has no doubt that her country disagrees with his sexist rhetoric about a woman taking over the office of president. “Yes, I’m more than convinced that it’s possible. Because my allies and I, and all Belarusian women who took to the streets have proven their resilience, their strong character. So Belarusians won’t have any doubts that a woman can become the future president of Belarus.”

2020 marked a turning point in many ways for the former Soviet republic — and especially for Belarusian women. Lukashenko’s security forces initially spared women, but that changed once they became the driving force during democratic protests. Images and reports emerged of women — from teenagers to grandmothers — being arrested, beaten and even tortured. Several prominent women activists were detained and driven into exile.

Tsikhanouskaya said it was “an impulse of the heart” that propelled millions of Belarusian women to protest the electoral fraud. “Going out against violence — it was like an instinct. When we saw how many we were, we started being proud of ourselves. ‘Here I am, I did it.’ The inner strength awoke.” 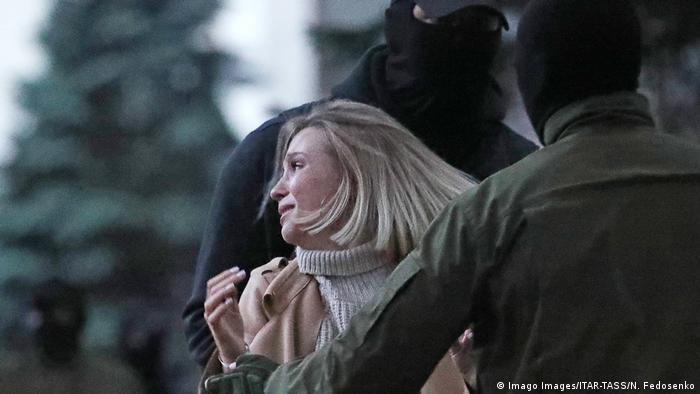 Police across Belarus have made mass arrests at pro-democracy marches; reports of violence and torture have emerged

‘The fear was always there’

Tsikhanouskaya described her remarkable ascent to leadership as that of having no choice. “The fear was always there: that you end up in prison, what would happen to your children then? Every morning you live with a feeling of fear. It doesn’t mean that I have overcome my fear. It means that you do something in spite of your fear, because there is no other way.”

Tsikhanouskaya and her children were put under immense pressure and were forced to flee the country. She has been living in exile in Lithuania since the election, from where she keeps on fighting for democracy.

The European Union and the United States have not recognized Lukashenko’s claim that he won the election. Meanwhile, Tsikhanouskaya has become her country’s representative on the international stage. Several world leaders have met with her — among them German Chancellor Angela Merkel.

Tsikhanouskaya met with Merkel in Berlin in October and described the longtime leader as “extremely friendly” during the conversation. “It was obvious that she has a sense of empathy, that she understands our pain, that she would really like to help us.” 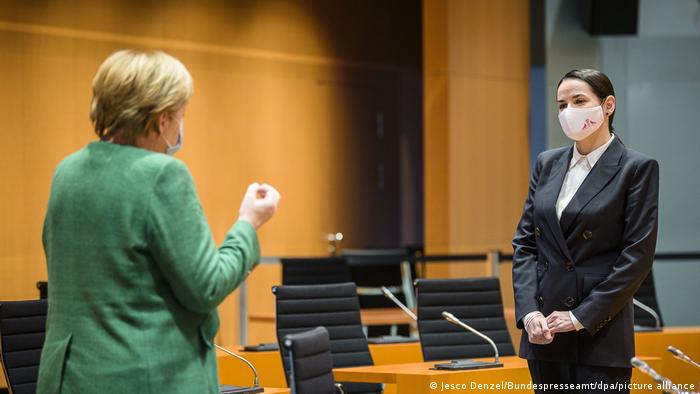 The opposition leader said that the 30-minute meeting focused on how Germany could help broker a possible dialogue between demonstrators and Belarusian authorities. “She’s so straightforward,” Tsikhanouskaya said of the longtime chancellor. Merkel shows “absolutely no arrogance and there’s a sense of warmth coming from her. That doesn’t contradict the notion of the strong woman she is known to be … And it doesn’t take tough talk to understand that she is a strong leader.”

Yet like the German leader, who has famously said she does not view herself as a feminist, Tsikhanouskaya said the term does not particularly apply to her, either. She emphasized her recent actions as instead being out of circumstance and necessity after her husband’s arrest: “I wouldn’t consider myself a feminist,” she told DW.

What does the future hold for Belarus?

Will Tsikhanouskaya continue her own quest for the presidency? At the beginning of March, Belarusian authorities put her on a wanted list for allegedly “preparing for unrest.” She told DW that “she is ready to be with the Belarusians for as long as they need me” but that she will not necessarily pursue the job herself. “If circumstances change and we’ll have new elections — that’s our goal — I don’t plan to run again. But we don’t know what the situation will be. It could be that … the people will decide that, yes, we trust her again. I always say: ‘If you want to make God laugh, tell him your plans.'”