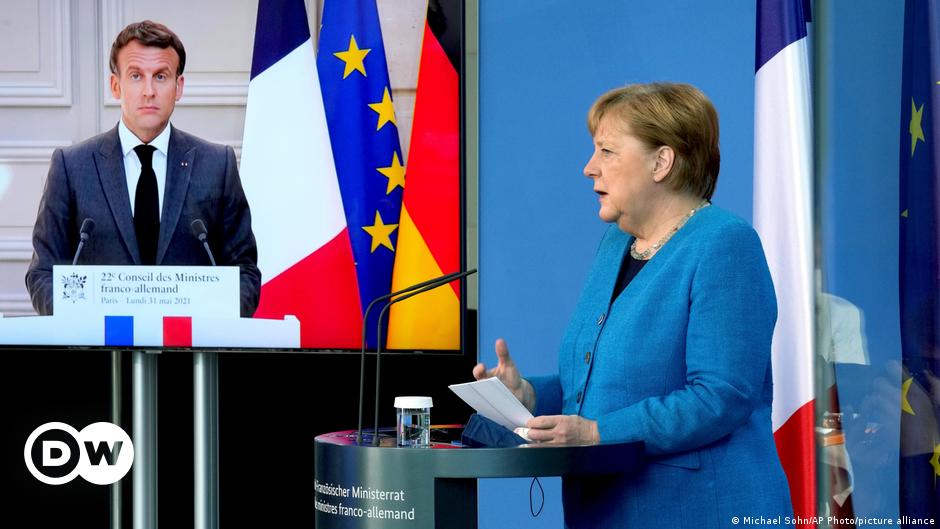 Chancellor Angela Merkel on Monday opened her last Franco-German Ministerial Council meeting. It was the 22nd installment of the twice-annual summit and covered a range of topics, such as increased bilateral industrial cooperation in the health care sector, the negative impact of the pandemic on both countries’ economies, EU and foreign policy, and international crises such as Belarus and Israel.

Prior to the meeting, Merkel spokesman Steffen Seibert spoke of the “incredibly close cooperation” Berlin has enjoyed with Paris during Emmanuel Macron’s first four years as French president. Seibert pointed to Franco-German Treaty on Cooperation and Integration, signed by Merkel and Macron in Aachen, Germany, on January 22, 2019, as a “major achievement” that lent new impetus to work on defense and environmental projects.

Paris, for its part, pointed to the €750 billion ($915 billion) European coronavirus recovery plan known as NextGenerationEU as the “high point” of Franco-German cooperation.

The two leaders picked up on those and other themes when they addressed reporters after initial discussions, with Merkel noting the importance of vaccine production and access, especially regarding Africa, as well as close defense cooperation — pointing to advanced joint fighter jet and tank projects.

Macron, who thanked Merkel for her initiative as well as her patience and ability to listen, emphasized the importance of Franco-German cooperation in driving a European agenda, praising the concrete steps both countries have taken to advance the Aachen Treaty as proof of what that cooperation can bring. The French leader highlighted projects ranging from environmentally friendly overnight trains between Paris and Berlin starting in 2022, cross-border youth and cultural projects and a common approach to Africa.

Q & A: NSA spying, Mali troops and the Normandy Format

During a brief question and answer session with reporters, Macron also underscored the speed with which the two countries had been able to get massive projects such as the European coronavirus recovery plan up and running —doing so within months rather than years thanks to close cooperation.

Macron also stood by Merkel when it came to recent revelations that Denmark had assisted the US National Security Agency (NSA) spy on her under the Obama administration — while the current president, Joe Biden, was vice-president. Macron called for clarity from both Denmark and the US on the issue, saying it was “unacceptable” for allies to spy on one another.

Both leaders claimed that despite Russian President Vladimir Putin’s embrace of ostracized Belarus strongman Alexander Lukashenko, EU decisiveness was having an effect. Both also underscored their commitment to the so-called Normandy Format negotiations seeking to negotiate peace in Ukraine.

And both also stressed the importance of continued military engagement in Mali after Macron recently threatened to withdraw French forces if elections were not held in early 2022 as scheduled. Calling the vote an “absolute priority,” Macron said: “The presence of our forces on the ground in Mali is not enough to fight terrorism. The fight also requires reinforcing stable and legitimate institutions.”

Merkel said she was against withdrawing German troops from Mali despite it witnessing its second coup in less than a year. She said Germany agreed with a recent ECOWAS (Economic Community of West African States) decision to declare election delays and contact with Islamist forces by political actors a “red line.”

Merkel with a smile: ‘We’ll take stock when the work is done’

The first Franco-German Ministerial Council meeting took place in Paris on January 22, 2003. It replaced the annual summits of French and German heads of states as stipulated in the Elysee Treaty of 1963. The council, which seeks to deepen working ties between the neighboring countries by facilitating what are essentially mixed-government cabinet meetings, generally convenes twice a year in the spring and fall.

Monday’s meeting was the last to be hosted by Merkel, who will leave office in September. Asked to sum up her experience as part of the Franco-German endeavor, Merkel said she appreciated the discussion it fostered, calling it enriching. But when asked to take stock of exactly what had been achieved by the bilateral team, she demurred, saying with a smile, “We’ll take stock when the work is done.”