COVID: Back to ′normal′ in Berlin′s restaurants? | Germany| News and in-depth reporting from Berlin and beyond | DW

The food has been ordered, the menu is set. It includes asparagus, saddle of lamb in filo pastry. And, to top it all off, ice cream flavored with sweet woodruff harvested by the maestro himself: restauranteur Vincenzo Berenyi.

“I’m delighted that we’re getting back to business,” says the beaming Berenyi. “I feel like a kid at Christmas.”

Restaurants across Germany were told to close down back at the beginning of November 2020.The COVID-19 lockdown was initially slated to last just four weeks. But since then, more than six months have passed. 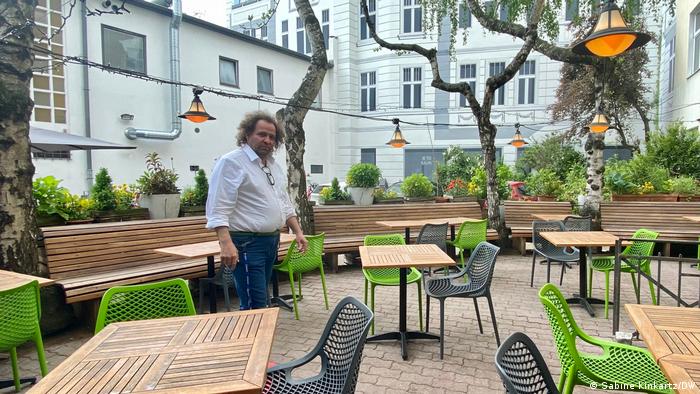 Berlin is among Germany’s federal states that have given the go-ahead for restaurants to reopen over the Whitsun or Pentecost holiday. However, the new regulations in Berlin only apply for “open-air gastronomy.” Half of the capital’s restaurants will have to stay shut because they simply are not able to comply with the requirements. Although many of them do have the capability to set up tables and chairs outdoors, this would not, however, be enough to cover their costs.

Berenyi’s “Kurpfalz Weinstuben” is a Berlin institution. Normally, around 50 people would be served on the busy terrace outside the restaurant. But social distancing means that there are fewer tables, with a maximum of 36 guests permitted. Vincenzo Berenyi says he would need each table to be occupied for two sittings in order to make reopening worthwhile.

The restaurant opens at 5:00 p.m. “Guests from the first sitting need to depart by 7:45 to make way for a second round at around 8:00,” says Berenyi. What’s more, guests have to prove that they are either fully vaccinated, have fully recovered from infection, or prove a recent negative COVID-19 test.

Binding reservations can then be made via the restaurant’s website. Booking a table requires such details as name, address and telephone number. And there’s an advance reservation charge of €30 ($40) per person, which is deducted from the bill at the end of the meal. “We have to be sure that guests who have booked do actually turn up. Otherwise, the whole system simply won’t work,” Berenyi explains. 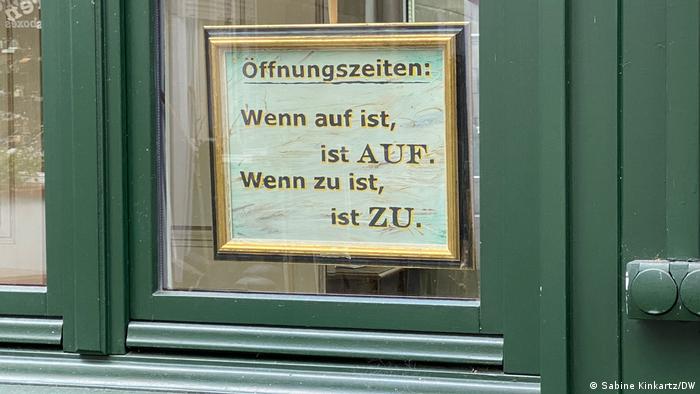 The restaurateur insists he’s not concerned that all the fuss will deter potential guests from coming: “They want to be here. They’re really looking forward to things finally getting back to normal.” But there’s another headache: the weather. Spring has so far been a huge disappointment, distinctly cool with plenty of rain.

This is why one corner of the restaurant is piled high with 30 new grey fleece blankets. Berenyi has also invested in some large umbrellas for the terrace, and four patio heaters are ready to go. So the effect of cool temperatures or a few raindrops can be minimized. 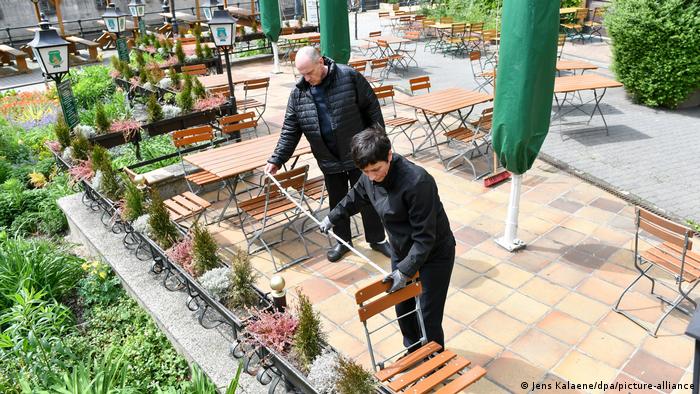 Guests have to be seated at least 1.5 meters apart to comply with COVID restrictions

Meanwhile, nobody can say how long the indoor areas of the restaurant are likely to remain closed to customers. “I hope that’ll change by the end of June at the latest,” Berenyi says with a distinct note of irritation. “I don’t really want to give much thought to the reasoning behind this division between indoor and outdoor areas in the catering and welcoming business. I mean, I’m seeing people crowding into buses, trains, supermarkets.”

Berenyi and his business partner Sebastian Schmidt, the man in charge of the kitchen, have designed the menu to make it possible to sell some off some of the food as takeout if the weather doesn’t play along. They’ve also set up a large grill so that guests can stand and keep warm while enjoying barbeque lamb or ox cheeks served in crusty rolls with potato or tomato salad.

“‘Grill and chill’ is our motto, and we want it to have a real party flavor. We’ve been in touch with a brewery to deliver extra supplies of beer if required.”

Coming up with new ideas

Berenyi plans to to take things as they come, remain flexible, and tackle new challenges with an open mind. That is what the restaurant staff have learned in the tough months that they now hope to leave behind. During lockdown, they’ve been fueling businesses and keeping customers happy by offering fresh, tasty, and even high-end takeout.

Such initiative and ambition has helped to keep the restaurant afloat (as have state subsidies). Things had been going well before the pandemic took hold, and the partners had been able to build up significant reserves. “But despite government support, within a year we’ve seen losses of between €50,000 and €60,000,” Berenyi calculates.

Nobody believed that the lockdown in the restaurant business would last so long as it has. “There was a time in January when it hit me hard and I was really down,” Berenyi confesses. The feeling was that people in government “didn’t think that we were of any importance.”

“As a sector of the German economy, we’re directly and indirectly accountable for nearly 9 million jobs,” Berenyi points out. He contrasts the response toward gastronomy with that toward the automobile industry: “When they cough, everybody jumps. But we’re just not relevant.”

However you look at it, the Weinstuben restaurant will continue to face an uncertain future. “For now, everything depends on how many people are vaccinated, and how quickly. And what it will mean when the fall and winter come round again,” says Berenyi.

No vaccination, no job

The boss himself has already received his second vaccination does, and all of his staff are ready to follow his example. “I asked each of them if they would also be open tothe less favored AstraZeneca vaccine, and they all said yes.” The team of 16 people includes a young woman who might be at higher risk for an extremely rare incidence of blood clotting with the AstraZeneca vaccine. Berenyi says he will do all he can to ensure that he can organize vaccination for her with BioNTech-Pfizer or Moderna options. “The risk of thrombosis, especially among younger women, is something I take very seriously.”

In the big picture, Berenyi would favor a hard line on vaccinations in Germany, even making them obligatory. Certainly, he has decided that all employees of his own business will in the future have to be fully vaccinated: “Anybody who opposes vaccination won’t get a job in my restaurant. They’ll have to go!”